The hunting rifle is first found by Joel after Tess sacrifices herself to buy them time, taking it off a dead Firefly on the second level of the Capitol building.[1]

Ellie briefly uses another hunting rifle to cover Joel when they encounter a group of hunters and again during the Winter chapter when she takes a rifle from David to hold on him in lieu of her bow, and uses it for some time until her capture. The rifle has no scope, but is upgraded with a three shot capacity and power.[2]

The weapon is especially useful against armored foes like ballistic vest-wearing soldiers and fungus-plated bloaters because of its armor piercing abilities. When fully upgraded, this weapon will always kill with 1 shot (human enemies) to the body, even on armored enemies, and 1 headshot on clickers.[3] If it is not upgraded, this weapon will not immediately kill an armored human.[4]

The following is a list of upgrades available for the hunting rifle at workbenches, and the parts and level of tools required to upgrade each.

The hunting rifle appears in The Last of Us: Left Behind. Ellie can find the rifle on an enemy.[5]

In Factions MP, the hunting rifle is available by default. The default hunting rifle costs two loadout points, and comes with a scope equivalent to the fully-upgraded scope in singleplayer. The hunting rifle can be suppressed at the cost of two additional loadout points. The player starts out with 5 rounds (or 7 with the starting ammo multiplier booster) and it costs 240 Parts to purchase three more rounds.

When upgraded, the reload speed and starting ammo is increased, as well as decreasing the time it takes to zoom in.

The upgraded hunting rifle can change its zoom magnification. When a player is aiming the hunting rifle, the light reflecting off the scope lens can be seen, which can give away the player's position.

While the hunting rifle can inflict great damage with a single shot, the reload time is slow; aiming at the body is usually not a good strategy, unless you shoot at the enemy at close range and drain the rest of the foe's health with punches or melee weapons. The Hunting Rifle is perhaps best paired with the revolver, as one body shot from the hunting rifle followed by a shot from the revolver always downs unarmored targets.

Hawk-eyed 2 or 3 can be helpful for a sniper, as marking enemies causes their silhouettes to glow red from behind walls, and aiding in shooting targets through thin cover. This also allows leading headshots from out of cover to be more manageable. Sharpshooter and its variants can be helpful, as the reduced damage wobble can prove crucial for a weapon demanding such precision.

Finally, fortitude is often useful with the hunting rifle, as the very long-range engagements that usually take place with such a weapon usually means that one can crawl away safely if downed. Second Chance also works well if the player is a sniper, since they will likely lack health kits due to being in a single position most of the time.

Like the burst rifle and burst pistol, if a headshot is made on an enemy with less than 50% health, it executes them instantly.

The hunting rifle appears in The Last of Us Part II, notably used by members of the Jackson community.[6] It can penetrate more than one enemy and possesses a scope once upgraded. There is a tutorial the player experiences while playing as Ellie where Tommy teaches Ellie the best way to shoot with the scope at long range, and how they can shoot obstacles to influence how the infected patrol the area.[7]

The following is a list of upgrades available for the hunting rifle at workbenches, and the parts required to upgrade each:

A Firefly corpse with a hunting rifle. 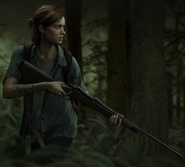