The Cordyceps brain infection (abbreviated as CBI) is a parasitic fungal infection that has devastated mankind in The Last of Us series.

In The Last of Us, a mutated strain of the Cordyceps fungus began to spread in the United States in late September 2013. The Cordyceps originated from South America, carrying into humans through infected crops. Joel and Sarah Miller's local newspaper in Austin, the Texas Herald, reported on the infection, stating on the front page of the September 26 edition: "Admittance spikes at area hospitals! 300% increase due to mysterious infection" followed by the article "FDA expands the list of contaminated crops. Massive recalls anticipated" saying:

Several months later, roughly 60% of humanity was either killed or infected by the fungus,[3] later medically referred to as Cordyceps brain infection.[4]

The fungus grows while the host is still alive, with hosts undergoing four stages of infection. Stage one begins within two days of infection, wherein the host loses their higher brain function (and with it, their humanity), rendering them hyper-aggressive and incapable of reason or rational thought. Within two weeks, the host enters stage two of the infection, wherein the fungus begins altering their sight as a result of progressing fungal growth over the head and corruption of their visual cortex. After a year of infection, the infection enters stage three; scarring their face and blinding them, resulting in them developing a primitive form of echolocation to compensate. In very rare cases, if the host survives for over a decade, they reach stage four. They develop hardened fungal plates over most of their body. When the fungus kills the host, the host's body grows stalk-like fungal projections which release infectious spores. The infection can also be spread through bites from living hosts. Hosts can only be infected while alive, as the fungus is unable to infect dead bodies due to its parasitic nature, though dead infected can release spores regardless of stage.

To protect themselves from airborne spores, survivors wear gas masks; Joel has one strapped to his hip as does Tess. Those who are immune do not need them, namely Ellie.[5]

The infection seems unable to spread in open air areas, such as the countryside, although some of these areas (such as Lincoln and a suburban neighborhood in Pittsburgh) possess a high population of infected.[6][7] The infection mostly thrives in underground or enclosed areas commonly avoided by people, especially sewers,[8] subway tunnels,[9] and some buildings.[10][11][12]

In the Left Behind DLC, during her search for medical supplies, Ellie discovers that an attempt was made by Captain Regan Francis to stop the infection from spreading throughout the body of her fellow survivor Private Eugene Ellis by quickly amputating his bitten right arm.[13] Francis chose not to follow the military's Infection Protocol to kill Ellis after having already killed Officer Larry Caulfield when it was discovered he was bitten earlier.[14][15] It is implied that the amputation may have stopped Ellis from becoming infected, but not knowing the future consequences of Regan's actions had made both of them doubtful of whether this course of action was right or wrong.[16] Ellis later shot Regan dead out of fear that she would kill him, and later bled out in an air duct after escaping from some infected.[17]

Naughty Dog developers created the idea for the Cordyceps brain infection after they were inspired by an episode of the BBC documentary Planet Earth titled "Jungles", narrated by Sir David Attenborough. In the episode, it features an infected ant being killed by Ophiocordyceps unilateralis, as well as showing a variety of other insects and arachnids that were killed by different species of the fungus.

On this scene, creative director Neil Druckmann said: "it was all based on the idea that the more numerous a species becomes, the more likely it is to be preyed on by this fungus." In reality, it is quite impossible for humans to be fatally infected by the Ophiocordyceps genera but may undergo behavioral change or 'disorder'. Since humans are easier to dissect (in terms of removing foreign substances or matter) than insects (also body size can also have a different outcome for the infection), normal Cordyceps would take weeks or months for it to be fatal.[18] 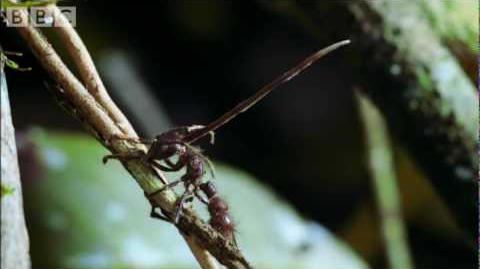