View source
watch 02:59
Metroid Dread - The Loop
Do you like this video?
Play Sound

Emily Swallow
Emily was an antagonist in The Last of Us Part II. She was a member of the Seraphites.[1] She is voiced and motion captured by Emily Swallow.[2]

Nothing is known about Emily's background or early life except that she was a survivor of the Cordyceps brain infection outbreak.[1]

At some point after the outbreak, Emily joined the Seraphites.

Emily and her group ambushed Abby Anderson during her search for Owen Moore. Two of her henchmen pinned Abby down allowing her to knock Abby unconscious with a hammer. She then had her two henchmen drag Abby into the woods, where three hanged and gutted men hanged above them. Emily tied another noose around Abby's neck and hanged her, but instead of letting her die from rope strangulation, Emily put a bucket under her so she could breathe. Emily explained that the three men were executed because they were nested with sin and prepares to gut Abby with her knife, but was halted when another prisoner named Yara arrived.

Emily had her henchmen make Yara kneel as she was asked where the other Apostate, Lev, was. Instead of answering, Yara spat in Emily's face. In retaliation, Emily had her henchmen hold Yara down and beat her left arm with a hammer. As soon as one of the henchmen took the hammer to beat the other arm, Lev shot him twice with a bow and arrow from the woods. Yara used the confusion to take the hammer and bash the other henchman in the neck. With Emily distracted by both Lev's and Yara's attacks, Abby used the opportunity to try to strangle Emily with her legs, with Yara landing the killing blow by bashing her in the head.

Emily's corpse was later left behind to be consumed by Stalkers.[1] 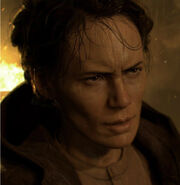 Emily in the woods.