The Last of Us Wiki
Register
Don't have an account?
Sign In
Advertisement
in: Article stubs, Citations needed, Mentioned-only characters,
and 3 more
English

View source
watch 02:59
Metroid Dread - The Loop
Do you like this video?
Play Sound
This article is a stub
It has insufficient information and needs more content. Assist the wiki by expanding this article as much as possible.

The Last of Us Part II (mentioned)

Eugene Linden is a character mentioned in The Last of Us Part II.

Pre- The Last of Us

Eugene was a member of the Fireflies and served alongside Tommy. Eugene abandoned his wife Claire and their daughter, despite the former's protests, to join the group.

Under the command of a brutal cell leader, he and Tommy committed several terrorist attacks together while in the group, particularly in the Denver QZ. One attack there led to the deaths of three soldiers and two civilians. According to Dina, Eugene also tortured a general in the military with Tommy, something that she couldn't see either of the men doing after she met them.

Based on the Creek Trails logbook, Eugene signed up for the creek trail and ski lodge patrol routes.[1] He mentored Dina during their patrols by teaching her how to repair electronics, which later allows her to repair the radio in the theater in Seattle.[2]

During their patrol, Ellie and Dina mention that Eugene died from a stroke at the age of 73, the two of them wistfully hoping that they remain as sharp-witted, let alone alive at that age.

When the two women escape a blizzard by taking shelter in an abandoned library, they find a plethora of electronics and equipment that belonged to Eugene, as well as his Firefly pendant. 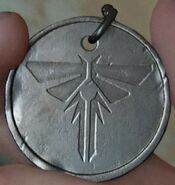 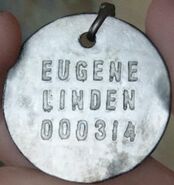 Photo of Eugene and his family