FEDRA is amalgamated with the United States military as the ruling authorities of the quarantine zones. Actual FEDRA officials are not encountered during the games, but various individuals working under their auspices are seen, such as soldiers and drafted civilian workers.[6]

FEDRA is one of the last remnants of the pre-outbreak United States government, alongside the Department of Defense, and the Center for Disease Control (CDC).[7]

Alliance with the military

Following the outbreak of Cordyceps brain infection (CBI) in September, 2013, the Federal Disaster Response Agency (FEDRA) replaced the United States government as the nation's leading authority. They took control of the military and declared martial law, removing the bureaucrats from power.[8] In order to contain the fungus, FEDRA had the military move all uninfected civilians into large quarantine zones (QZs) within major cities such as Boston, Pittsburgh and Seattle.[4][9][5] An Attorney General from FEDRA reported that the CBI had killed or infected at least 60% of the nation's population by the early 2010s.[10]

FEDRA maintained their own headquarters, independent from the QZs.[1] FEDRA also worked with the CDC to produce various fliers and informative documents, ranging from informing civilians of wanted criminals,[11][12] to infographics about the stages of Infected.[13][14]

FEDRA initially allowed civilians living in the various QZs to write letters to inhabitants of other QZs that were delivered between them.[15] However, FEDRA soon used the military's might to transform the zones into individual police states, exercising absolute power over the zones, which prompted Marlene to create the Fireflies, a militia group dedicated to defeating FEDRA, restoring the pre-outbreak government and finding a cure for the disease.[8]

FEDRA had the military fortify the zones with extreme levels of security. They placed soldiers and checkpoints at numerous points throughout the cities and created 30 foot high concrete walls with guard towers and searchlights. The soldiers would often patrol the surrounding area to contain any citizens trying to escape, and would pursue escapees several hundred meters from the zone's walls.[7]

In Seattle, FEDRA created numerous outposts, using radio signals to communicate reports between them and their headquarters.[16][17] Lt. Carmelo Torres worked closely with FEDRA captain Paul Douglas, keeping in regular correspondence with him to coordinate FEDRA authority over the Seattle QZ.[1]

FEDRA also drafted civilians to perform work duties both inside and outside the quarantine zone, on a bi-yearly basis.[6] Civilians residing within quarantine zones could also join the military to bolster their numbers. Records of FEDRA members were subsequently kept in their headquarters.[18] FEDRA also maintained military boarding schools, where children were trained to become soldiers.[19]

Between 2013 and 2033, FEDRA and the military struggled to maintain control of the various quarantine zones due to a combination of growing food shortages,[9] Firefly attacks,[20] and further CBI outbreaks.[21][4]

The Fireflies attempted to wrestle control of several quarantine zones from FEDRA in order to establish a better society. In the early 2020s, the Fireflies led a revolt in Pittsburgh that successfully overthrew FEDRA and the military, but its inhabitants eventually became hunters.[22] In Denver, Tommy Miller and Eugene Linden's Firefly cell waged war against the military in the city, regularly bombing checkpoints. The pair even tortured a FEDRA general while stationed there.[2] The Fireflies successfully defeated the military in Salt Lake City, converting the local hospital into their primary base by the early 2030s.[23]

Despite FEDRA successfully killing the Pattersons, member Isaac Dixon filled the void they left. He killed three FEDRA soldiers and successfully organized a more hard-lined resistance that included bombing campaigns and facing FEDRA and the military in open combat. The tide turned and, with the WLF now winning the conflict, FEDRA members began defecting to the WLF.[3]

By the late 2020s, the WLF defeated the military and Torres was left to order FEDRA forces to evacuate the city.[27] Torres penned a note to Paul Douglas at FEDRA Headquarters conceding that the zone was lost.[1] The WLF also successfully captured all of FEDRA's military checkpoints in the city.[17][28] Although, FEDRA members Perez, Green, Adams and an unnamed soldier managed to escape the WLF's raids on the checkpoints, and the radio outpost at the Pinnacle Theater was free from WLF control by 2038.[5][17]

By 2033, FEDRA and the military had abandoned almost all of the quarantine zones, having lost control of them to many uprising by groups, primarily the Fireflies, hunters, and Washington Liberation Front.[29][9][5] However, FEDRA still controlled Boston, having evicted the Firefly resistance from the city by summer.[29] They also had a presence in a few other cities.[7]

Though it controls only a few zones,[30] it is still powerful, with control over the remnants of the US military, and they dispatch the latter to pursue Joel, Ellie and Tess as they try to escape the Boston quarantine zone and reach the Capitol Building.[31] Many residents in Boston disliked FEDRA's rule, judging by the amount of graffiti insulting them and their policies.[4][32]

Sometime before 2034, according to Dina, some disgruntled FEDRA members broke off from the organization to form a group in New Mexico called the Ravens, who were known for running protection rackets and taking multiple wives.[5]

FEDRA seal on a banner 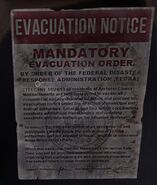 FEDRA seal as seen in the Synagogue in downtown Seattle. 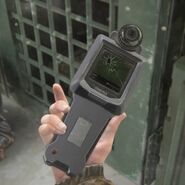