The infected are humans who have been infected by the Cordyceps brain infection and subsequently mutated into horrific new forms. The resulting creatures are aggressive, and will attack any uninfected human and animals on sight.[2]

The infected are one of the main enemy types in The Last of Us, Left Behind, and The Last of Us Part II, the other being the human enemies.

The infected are the result of a sudden outbreak of a mutant Cordyceps fungus that now affects human beings as opposed to insects. The fungus reportedly originated in South American crops; various newspapers in Austin in 2013 support this claim.[3] The fungus infects the human brain, growing mycelium inside the brain tissue and killing the brain's cells. This erases their memories and drives them insane, modifying their instincts to seek no goal other than spreading the spores to others. Eventually the fungus kills its host, and will then grow out of the host's body to spread spores.[2]

Public reaction to the infected has been catastrophic. As the vicious fungus has taken hold of the majority of the population, the worldwide pandemic causes the total breakdown and destruction of society through widespread violence; the failure of martial law to contain the outbreak, the United States military's increasingly violent efforts to censor information, and the near-extinction of humankind. The Fireflies – a militia group formed in response to military oppression – have conducted a mostly futile war against the barely-functional government. They believe they can create a vaccine through study of the fungus and its hosts, one of the last organizations to do so.[4]

Those who are clear of infection are ordered by martial law to reside within a quarantine zone.[5] The military, under FEDRA's orders, bombed areas outside the quarantine zones to kill the infected and execute anyone suspected of infection on sight.[6][7]

For humans that have been exposed to a mutated strain of Ophiocordyceps Unilateralis, the fungus attacks the brain and begins to alter the behavior of its host. The host will then go through four different stages of infection: runner, stalker, clicker, and bloater or shambler; each stage is more dangerous than the last. However some have had resistance to the infection,[8] notably Ellie; she hasn't turned despite being infected for over five years.[9] There is also the unique rat king stage.[10]

The infection also spreads directly through contact with an infected or via their corpse - that is, the infectious spores created by the Cordyceps and released from the host's body upon death. These spores can quickly infect an individual, making breathing difficult and movement sluggish within only minutes is exposure in such spore dense areas.[4][11] Only Ellie has exhibited the ability to breathe spores without difficulty.[12][13]

Spore development is the last stage in the life cycle of the infected. The lifeless carcass serves as a breeding ground for the fungus to spread throughout the environment. When near death, an Infected will find dark, moist corners to die in. While this may be the end for the host, the fungus continues to grow. Those living in the quarantine zones are relatively safe because they are in places with significant airflow, leading to a low spore concentration, explaining why the only places with significant spore toxicity tend to be underground or abandoned buildings.[4][18][11]

In order for the fungus to infect a host body, the host must first be alive. Dead victims who come into contact with the infection do not undergo transformation. According to the Center for Disease Control, the victim can only become infected by inhaling the spores directly or coming into contact with an infected's bodily fluids, usually from a bite.[19]

Infected individuals must be exposed to specific conditions and circumstances in order to progress to the next stage of infection, otherwise, they may stay at one stage for an extended period of time. This is presented in the large number of runners in Lincoln and Jackson.[20][21]

Due to growing a fungus within themselves, all of the infected are vulnerable to fire. However, the rat king stage is immense in spores that it can survive extensive exposure to fire, able to charge through flames with only minor stagnation.[10]

The infected humans have since undergone a strange mutation by a specialized strain of Cordyceps. Runners seemingly begin to experience hair loss, discolored skin accompanied with lesions, and bloodshot eyes.[21] Stalkers can be seen with significant fungal growth around their eyes and shoulders. Skin will begin to peel from the face, sometimes causing the nose to fall off, as the fungus begins to break open the skull.[11] Clickers are horrifically mutated by the infection. By this stage, the skull has been split open due to advanced fungal growth on the brain, growing over or outright destroying the host's eyes.[20] Their teeth are rotten and jagged, and their skin is covered in mold and scaly fungal growths.[2] The fungal growth on bloaters is so advanced that it begins to form armored plates on the host, while also causing the body to bloat significantly.[22][10] The fungus also seems to offer the host some protection against the elements, such as the cold.[23][21] When the host is killed or dies from advanced fungal growth, the fungus continues to grow throughout the body, eventually emitting spores.[4]

Upon becoming infected, the victims gradually lose any ability to think freely and begin to behave irrationally as the fungus spreads in the brain. Relying on warped instincts, the infected will attempt to attack and/or eat any human they find. This becomes most prominent at stages 3 and 4, when their human characteristics begin to cease to exist entirely (e.g. feelings, thoughts, etc.). They lapse into their primitive, animalistic instincts, attacking anyone or anything that disturbs them, almost as a way to protect their territory.[2] However, clickers can be seen twitching and sometimes clawing at the fungal growth covering their face, suggesting that there still may be vestigial elements of the host attempting to resist the infection.[19] According to Jerry Anderson, fungal-growth in the limbic regions normally accompanies the prodrome of aggression in infected patients.[8]

The fungus spreads to the host's eyes as it grows, covering and blinding them. They then develop a primitive form of echolocation to locate prey, which results in them making a distinctive clicking sound.[2] After some time, the fungus kills the damaged host, usually in a closed-off space so the fungus can spread further.[4]

The infected, while having a higher pain tolerance than ordinary humans, are still susceptible to conventional injuries. A runner, when not attacking survivors, will moan in pain due to the fungal growth deforming its body and clickers will struggle while being shivved.[18] Sometimes infected that still have their entire face intact look sad or worried as they attack, indicating that first and second stage infected are aware of what they are doing, but cannot control themselves.[21] Gunshots are capable of startling runners and stalkers, so they seemingly feel fear in the early stages of infection.[11] All stages of infected will flail and scream wildly when set on fire or severely wounded. The body of an infected will spasm violently when the host is killed.[18][23][10] The infected have also developed sensitive hearing, as they can hear sounds that normal survivors cannot, such as the player hurdling nearby obstacles.[22][11]

Even after an infected individual has died, the fungus will continue to grow; consuming the body's mass to form a fruiting body and releasing spores that infect any human that breathes them. Survivors use gas masks to prevent this.[4][11]

The process of forming the fruiting body causes the corpse to become skeletal and brittle, fusing the remains to surfaces as it continues to grow.[11] As sufficient time passes, the fruiting body becomes a "moss" that can fill entire structures with deadly fungal growths the color of pasty human flesh.[18] Both of the spores and the fruiting body die quickly when exposed to sunlight, limiting the danger they present.[10] 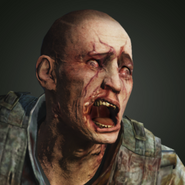 Stalker concept art for the face.

Concept design for a clicker

A clicker trying to bite Joel. 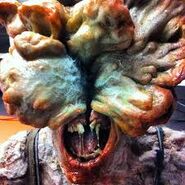 A close-up of a clicker

Joel killing a "clicker" in the VGA announcement trailer.

Joel encountering a stalker in the hotel basement.

Joel, against a trio of clickers

A clicker attacks Ellie as Joel tries to shoot it.

Tommy hitting an infected with a brick.

A bloater in Salt Lake City.

A bloater charges at Joel.

A bloater throws a mycotoxin.

Ellie prepares to combat a bloater.

Joel choking a stalker in the sewers.

A clicker attacks a cannibal, quickly killed by oncoming humans.

Cannibals fighting a group of infected.

A clicker attempts to bite Joel.

Joel striking a clicker with a pipe.

A developed spore cadaver, in the subway. 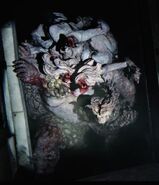 Close up of rat king.

Abby being spotted by a rat king.

Rat king that has just been defeated.