JJ is a minor character in The Last of Us Part II. He is the son of Dina and Jesse and Ellie's adopted son.[2]

Near the end of Dina and Jesse's relationship, the two had a sexual encounter that resulted in Dina becoming pregnant with JJ.[3] She revealed her pregnancy to Ellie near the end of their first day in Seattle while they were sheltered inside a theater, thus explaining Dina's recent bouts of sickness.[4] Sometime after Ellie and Dina left Seattle, JJ was born.[2]

JJ is first seen in his crib inside Ellie and Dina's house on their farm. Ellie picks him up and carries him into the kitchen, where the three dance with each other. JJ accompanies Ellie during her chores on the farm, but while in the barn, Ellie suffers a panic attack from the events of Joel's death almost a year earlier, making JJ cry. Dina rushed to the barn and quickly calmed JJ down.[2]

JJ appears to be a cheerful baby. He loves to dance, as shown when Ellie and Dina are dancing together in the kitchen, and he laughs and squeals when Ellie makes faces at him in the bathroom mirror.[2]

Dina is JJ's mother. She loves him dearly and sees him as an extension of his father.[2]

Ellie is JJ's adoptive mother. She affectionately nicknamed him "Potato" and would frequently bond with him by taking him outdoors to goat herd or watch the sunset. Ellie would often cradle him and walk him around the house as well, showing him pictures of his family members and having conversations with him.[2]

According to Dina, Jesse is JJ's biological father. While JJ never met his father, Dina promised to ensure that JJ knows about Jesse's legacy. Based on Ellie's journal, Dina tells JJ about Jesse regularly, and Jesse's parents have visited the farm at least once.[2]

Tommy shows affection for JJ and is surprised by how quickly he has grown. When Tommy confronts Ellie about her initially refusing to go after Abby, his aggressiveness causes JJ to cry.[2] 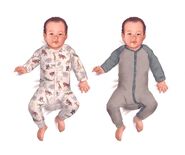