The large Rattler is a minor antagonist in The Last of Us Part II.[1]

Sometime after the Cordyceps brain infection outbreak, he joined the Rattlers in Santa Barbara, California. Like the other Rattlers, he captured, enslaved, and abused countless survivors and infected. He seemed to be of a higher standing within their ranks.[1]

The large Rattler led the capture of Abby Anderson and Lev in Santa Barbara, punching out Lev and ordered his companions not kill Abby, wishing to ensure her capture as a slave. He then removed an arrow from his smaller friend before telling him to tie up Lev. He remarked that Abby was a great catch for his plans.

Months later, he and the small Rattler were out patrolling and came across Ellie caught in one of their traps. The large Rattler laughed at Ellie mocking his friend for nearly getting bitten by a hanging clicker, who then angrily tried to have Ellie bitten by the clicker, only to get his throat ripped out.

The large Rattler shot at the clicker and Ellie, only for Ellie to use his dying friend's gun to shoot out his legs. He pleaded with Ellie for his life, who interrogated him on Abby's whereabouts. He revealed her location and said that Ellie could make it to her before the bite on her hand turned her (not knowing that Ellie was immune). Ellie then executed him and set off to find Abby.[1] 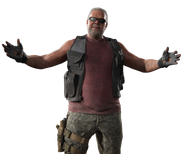