Leah was a minor character in The Last of Us Part II and a member of Washington Liberation Front. She was Jordan's love interest before Seraphites killed her.[2]

Leah was one of the eight WLF members who traveled to Jackson, Wyoming to kill Joel Miller.[4] Upon returning to Seattle, Washington she was assigned by Isaac to a two-week mission at a local TV station due to an increase in Seraphite activity.[3] She wrote a note to Jordan, mentioning that Seraphites had been spotted in the area, and also included a revealing photo of herself in case he missed her.[2]

The note and photograph were confiscated by Ellie after she killed Jordan at Eastbrook Elementary. Once she and Dina reached a safe place to read it, they decided to head to the TV station in hopes of gaining more information.

Once inside the TV station, they found Leah's dead body impaled with arrows. Ellie then discovered a duffel bag under her bed and found several photos that Leah took while in Jackson. They showcased all of Leah's friends: Abby Anderson, Manny Alvarez, Owen Moore, Nora Harris, Mel, Nick, and Jordan. Ellie expressed frustration over Leah's death, as they were unable to learn any new information. Despite not being directly involved in Joel's death, Ellie still viewed Leah as complicit.[2]

Leah was benevolent, having little to no ill-will out of the eight former Fireflies who traveled to Jackson to enact their revenge on Joel. This is evident in how she backed away when Joel was shot and pinned to the wall.[4] 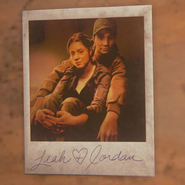 Photo of Leah with her boyfriend Jordan. 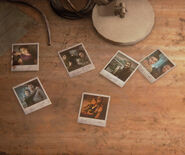 A collection of polaroids from Leah's bag.