The Machete is a long knife-like weapon used for close-quarters combat. It has a longer reach than a knife, but is shorter and more durable than a sword. Joel can carry a machete during The Last of Us. While it is meant to be used for rapidly cutting through vegetation, it can be used to deadly effect against enemies. This makes it a brutal weapon as well as a tool.

It is the second bladed weapon Joel Miller can find after the shiv. A machete always takes one hit to kill in the campaign. Despite this, it is the least durable weapon that can be held whilst moving, with only three uses before breaking. This also comes with the fact that it is the rarest bladed weapon in the game. However, it attacks considerably faster than the hatchet, making it a viable alternative when it comes to efficiency or durability if found. It can also be upgraded with modifications for up to six strikes. It is probably one of the best weapons to modify, as increasing its durability to six doubles its usage, allowing it to compete with the fully upgraded hatchets and shivs. Bloaters are the only infected that can withstand multiple blows due to their thick fungal armor, with around three to four attacks required to kill them. This is not highly recommended as bloaters can easily grab Joel and kill him in one grab unless weakened beforehand and attacked from behind. One of the first machetes can be found in "The Sewers" behind a door in Ish's Settlement that requires a shiv to open. Another machete can be found around Tommy's settlement before the ambush in the turbine room, depending on the difficulty played. A third one can be found in the Ranch and another in the garage with the flamethrower at the University of Eastern Colorado.

In the winter chapter, David carries a machete when he pursues Ellie, whom had escaped before he and his second in command James could kill her. He corners her in a restaurant and subsequently draws the machete in an attempt to kill Ellie. However, Ellie manages to take the blade from him and proceeds to hack him to death with the weapon. Using the machete, David can kill Ellie with a single slash.

In Factions MP, the machete is available to purchase after a total of 2625 supplies have been earned. It costs two loadout points and requires 400 parts to purchase. It comes with three uses, and needs three hits to down enemies. Modifying it grants two more uses, or three with brawler 2. Unlike the 2x4, the extra use does not deal any more damage than the unmodified hits. In Survivor mode, machetes' durability reset after the end of a round. In Interrogation mode and Supply Raid mode, the machete's uses reset to full after the user dies, provided that it wasn't completely used up before death.

The slices are done in an extremely fast 3 hit combo, making aiming nearly impossible for enemies and stunning those using other melee weapons such as the modded 2x4 with each slash. This almost guarantees a down for any enemy attempting to melee. Assuming all the swings connect, a machete user can always down a modified 2x4 user before they can get a swing in. However, the delay in between each 3 hit combo for the machete means that if the user does not down a 2x4 user within the first combo, then they are at risk of being hit before they can start another combo.

Like the 2x4, the machete automatically locks on to nearby enemies when swung, as well as drawing the player to the enemy.

Brawler 2 synergizes very well with the machete, as the extra hit allows the machete to down two people by itself before breaking. In addition, the very rapid swings of the machete coupled with Brawler 2's ability to regain health with each hit can make a machete user nearly impossible to take down in melee combat. Covert Training 2 or 3, Marathon Runner 1 and 2, and Agility 1 and 2 are all good skills to use to close the gap for effective use.

Regardless of whether it is selected as part of a loadout, players in Survival Mode are granted one machete from the first Loot Box they open after becoming the last one standing.

The machete deals 40 damage per hit, with three quick slashes meaning it is a one-use kill on its own. It only takes up two loadout points to equip, making it the cheapest purchaseable along with the flamethrower.

It is advised to increase its durability by upgrading it in a manner similar to a 2x4 as you will have a maximum of six hits with brawler 2 equipped and also rely on engaging in close quarter combat often to get the best and most efficient use out of it. Some also advise to not bother equipping a long gun since one should be trying to score kills up close and not far away, or even at medium range.

A useful way to save parts is for a player to purchase a machete, then drop it for a 2x4 and die. Upon respawning, they are granted a fresh machete with the original machete still lying on the floor where they dropped it, granting users two machetes for the price of one.

This weapon originally did not fare well against a modded 2x4 due to the latter being a one hit kill, but with the current patch it is much faster than the modded 2x4. When the two are used in a fight, the machete cancels the modded 2x4's hit, making it an effective counter. The standard 2x4, however, isn't cancelled so it's best to avoid wielders, or attack from behind. The animation is also skipped when striking, so one can back away if they feel they will not succeed in getting the down as well as being able to strike from even six feet away.

Melee damage isn't lowered by armor, making the machete an excellent counter to armored foes. It is also wise to ensure there is at least one durability still on the machete so the player can modify it without the need to spend more parts to purchase it again.

For those who aren't thinking of using this in a class setup, one may consider using it for a 'last man standing" scenario for supply raid or survivor since it becomes available in the box. There is no need to pick it up if one already has a modded 2x4 though, as they would be wasting the parts used on the board.

The machete appears again in the single-player mode for The Last of Us Part II. Ellie uses one in her fight against Abby Anderson. 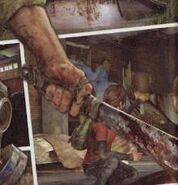 A picture of Bill's machete.