The Mob Attack Note is an artifact that can be found in Pittsburgh. The note is written in a spiral-bound notebook. The cover of the notebook is blue and features the FEDRA logo in white.

Note: All punctuation and capitalization are typed up as it appears in the game, when you choose to read it in text-form.

I just watched a mob douse Capt. Mastros and the rest of my team in gasoline and burn them alive. The animals were actually celebrating. Some old fucker complained it was a waste of gasoline.

There were too many of them. All I could do was slip away. But I'll remember all their faces. Gonna hunt each one of them down if I have to. 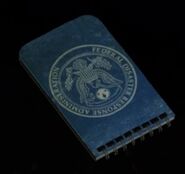 Close-up of the artifact on the ground.
Add a photo to this gallery

Retrieved from "https://thelastofus.fandom.com/wiki/Mob_Attack_Note?oldid=85270"
Community content is available under CC-BY-SA unless otherwise noted.