Nora Harris was a supporting character in Abby's story and an antagonist in Ellie's story in The Last of Us Part II.[2] She was a member of the Washington Liberation Front and one of Abby Anderson's allies.

Nora was once a member of the Fireflies, where she trained as a medical officer under head surgeon Jerry Anderson in Salt Lake City, Utah. After Jerry's death at the hands of Joel Miller, Nora joined her friends Abby Anderson, Owen Moore, Manny Alvarez, Mel, Jordan, and Leah in their journey to Seattle, Washington to join the Washington Liberation Front (WLF) sometime after 2034.

Soon after Christmas of 2037, Nora traveled with Abby and six others to Jackson, Wyoming in search of Joel to enact vengeance on him for his attack on the Fireflies. Abby found Joel with his brother Tommy Miller and brought them to the lodge where Nora and the others had set up camp. On Abby's signal, Nora attacked Tommy and knocked him out with her pistol. She kept her gun trained on him while Abby beat Joel to near-death with a golf club.

When Ellie arrived and tried to attack Abby, Nora helped her friends subdue her. After Abby had finished killing Joel, Nora and the others fled the area before search parties could arrive, leaving Tommy and Ellie behind, unconscious.[3]

Some time later, Nora returned with the group to Seattle. She was stationed at the WLF's medical bay at their forward operating base in preparation for a final attack on the Seraphites. At some point, Isaac Dixon revealed to her that Owen had run away after apparently shooting a WLF soldier, Danny, while defending an old Seraphite. Later, she helped treat Mel's gunshot wound from a Seraphites' ambush. She saw Abby and Manny, pulled them aside, and revealed what Owen had done. She asked Abby to not tell Isaac that she had told them.[4]

While stationed at Lakehill Seattle Hospital with a group gathering medical supplies, she learned that Abby had gone AWOL and was imprisoned in an elevator elsewhere in the building. Nora rescued her and helped escort her to the lower levels of the hospital so that Abby could retrieve supplies for Mel to use in surgically removing Yara's broken arm. Nora revealed that the lower levels may be filled with decades-old infected and, before returning to work, warned Abby to watch her back.[5]

Later on, she encountered Ellie at the hospital, who held her at gunpoint. As Ellie tried to get Nora to tell her where Abby was, Nora provoked her by insulting Joel's death. An enraged Ellie attempted to hit her, but Nora threw a tray at her and ran from Ellie, who chased her. Ellie eventually cornered her and took her hostage to stop WLF soldiers from shooting her. With no way out, Ellie pulled Nora with her into a spore-infested lower level of the hospital. Nora, now infected, again ran to escape Ellie. However, Ellie eventually caught up and trapped her in a corridor. Nora displayed astonishment at Ellie's immunity to the spores. Ellie gave her one last chance to reveal Abby's location, but Nora refused. Ellie then beat Nora near to death with a pipe, and eventually forced her to reveal Abby was hiding at the aquarium.[2]

Nora was a polarized woman. With people like Joel and Ellie, she maintained a cold exterior,[3] calling Joel a "little bitch" for doing what she deemed was an inhumane act in slaughtering the Fireflies and sabotaging a potential cure for the CBI. Her hatred for Joel flowed on to Ellie, whom she taunted about the man's death.[2]

With her friends, though, Nora displayed loyalty. When Isaac told Nora not to tell anyone about Owen's act of defiance, she told Abby and Manny about the situation, anyway, since she was closer to them as former Fireflies.[4]

Nora also went against the WLF to help free Abby from their custody, and lying for her. However, Ellie was able to break that loyalty by torturing her, revealing that her loyalty had its limits.[2] 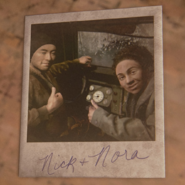 Photo of Nick and Nora taken on their trip to Jackson.