View source
watch 02:56
Raise a Floppa - The Loop
Do you like this video?
Play Sound
This article is about the character from the video game series. For her appearance in the TV series, see Sarah (TV series).

Sarah Miller is the tertiary playable character and a supporting character of The Last of Us. She was the 12-year-old daughter of Joel before the Cordyceps brain infection outbreak.[3]

Prior to the outbreak, Sarah lived a regular, everyday life in the Austin, Texas area with her father Joel. She was on a youth soccer team called the "Defenders", playing in the number 14 position, and won an individual award in a game, as evidenced by several pictures in their house, especially one of her and Joel together. She also enjoyed hiking with her father and skateboarding[4], as shown by a skateboard leaning against the wall in her room at the start of the game. She was a fan of the rock band "The Bash", having a poster of them on her bedroom wall. She also liked the "Dawn of the Wolf" films, a play on the Twilight saga, as seen by a poster in her bedroom.[3] It is implied she made Joel take her to see the film.[5] Sarah's mother and Joel were married "for a while"[6] but she left Joel shortly after Sarah was born.[7]

Sarah is first seen waking up on a sofa to find Joel talking on the phone to her uncle Tommy. Afterwards, Joel sits down on the couch and Sarah gives him a birthday present, a new wristwatch where she jokes that she bought it with the money she got from selling "hardcore drugs". After watching some TV with her father, she eventually falls asleep again and Joel carries her back to her room and puts her to bed.[2]

Later, she is awakened in the middle of the night by an urgent phone call from Tommy who instructs her to get her dad. The line goes dead, prompting her to search for Joel, passing the birthday card she made for Joel, in which she likened him to a dinosaur though remarked he was the best dad in the world. She checks his room, seeing a news report about a gas leak that cuts dead as an explosion in the distance startles Sarah before she proceeds downstairs, seeing several police cars rush past her house.[3]

She finds her father's cellphone with eight missed calls and a text from Tommy saying "where the hell are you? CALL ME!", along with "On my way". She enters her father's study, just as Joel runs in through the open sliding door to the backyard; he is covered in blood and extremely nervous. Joel retrieves his revolver from his desk and says that their neighbor Jimmy Cooper is "sick". The man in question appears, running towards the sliding door, smashing his way through the glass and into the room, causing Sarah to jump back in fright; Joel instinctively puts himself between her and Jimmy. The man charges at the pair, forcing Joel to shoot him and Sarah is in disbelief at what had occurred, but is quickly calmed by her father.

Suddenly, Tommy pulls into their driveway and they jump into his car where they begin driving out of town to get to safety, but some routes are blocked and others clogged with traffic. With no alternative, Tommy diverts into town, narrowly avoiding an infected patient trying to enter the vehicle. In the mayhem, a car crashes into them, injuring Sarah's leg and impairing her movement. With the car now wrecked, Joel carries her whilst Tommy protects them, looking for a safe place. They enter a bar with some infected hot on their heels. Tommy instructs them to get to the highway and he'll hold the infected back and catch up with them. They flee, closely followed by other infected.[3]

As they approach the highway, with infected closing in on them, a soldier saves them by shooting the infected. The soldier radios for orders on what to do with Joel and Sarah, only to be instructed to eliminate them despite Sarah's presence. Although Joel tries to reason with him, the soldier reluctantly opens fire and Joel dives for cover, barely shielding Sarah; the girl cries out in pain as they fall down. The soldier walks up to Joel and prepares to kill him, but he falls to the ground before he can do so, shot by Tommy. The relief is short lived as Sarah begins crying; Joel sees that Sarah was shot in the abdomen, and pleads with her to hang on. She clasps her father, Joel trying to stem the bleeding to no avail and she dies in his arms.[8] Sarah died in the early hours of September 27, 2013.[3]

The loss of Sarah had an adverse affect on Joel as he is unable to move on from her death even twenty years later that he doesn't even speak of his daughter to anyone if he can help it and he still wears the watch she gave him, despite it breaking over the years.[9] After Joel's adventures with Ellie, the man notes several similarities between her and his deceased daughter, believing they would have been good friends. He even affectionately calls Ellie "baby girl", which is the same endearment he used for Sarah, suggesting that Joel views his relationship with Ellie as similar to what he had with Sarah.[4]

While living in Jackson, Joel reframes the torn picture of him and Sarah, keeping it by one he had with Ellie on in the windowsill of his bedroom.[10]

Sarah was a small girl with short highlighted blonde hair, blue eyes and she wore a wooden cross necklace. She wore purple-checkered pajamas, a grey T-shirt over a darker-grey longer sleeved top. She was barefoot throughout her segment of the game.[3]

Sarah shares Joel's sense of humor as she trades jabs with her father during the prologue without missing a beat. She cares about him, as she somehow manages to scrounge up enough money to buy him an implied expensive birthday present.[8]

Like Ellie, Sarah is mature for her age as she is calm and collected when she claims she's 'fine' to Tommy, mere minutes after Joel shot their infected neighbor. She seems to possess above-average intelligence for her age given there is an Honor Roll certificate and an additional academic award hanging above the computer in her room.[3]

Sarah is also caring and selfless as she was worried over Tommy's safety instead of her own and said that they should have stopped to help the family they passed in the road. Another possibility is that she was in shock because of the whole ordeal, and was able to compartmentalize it.[3] 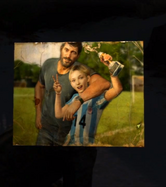 Sarah and Joel at soccer.

Joel and Sarah's picture preserved in his house.

Sarah with her father, Joel.

The Bash, the band Sarah likes. 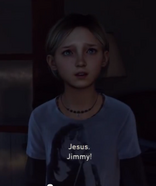 Sarah being carried by Joel.

Joel and Sarah being found by a soldier. 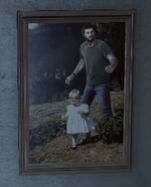 Photo of Joel with Sarah as a young child.