The Seraphites,[1] colloquially called Scars, are a primitivist cult and antagonistic faction in The Last of Us Part II. They are currently at war with the Washington Liberation Front (WLF) for control of Seattle.[2]

The Seraphites formed in the Seattle QZ a few years after the outbreak. They sprang up after people began to follow a religious fanatic in the city, a woman who considered herself a prophet and preached that mankind's fall to the Cordyceps Brain Infection was brought on by their own sin and efforts to live in a machine dependent world.[3]

Over time, hundreds joined her following and capitalized on the WLF's war with FEDRA to form their own community on an island a few miles from Seattle's shore. Building their houses from trees and creating their own farms, the Seraphites became a thriving community about one thousand strong, although Yara mentioned only around half of them were trained for combat. They developed several villages on the island and made a city that was dubbed "Haven" where the majority of the civilians lived.[4]

Once FEDRA was defeated, the prophet wrote down her beliefs and teachings and began preaching them to members of her community, essentially starting an entire religion. After her death, the elders in the community grew hostile towards the WLF in the main city and sparked a war with them for control of the forest areas, notably in the parks and at Martyr Gate. They created shrines to honor the prophet and made it mandatory for members to learn her prayers and chants, especially among soldiers while in combat. The elders also began a tradition of capturing trespassers and WLF soldiers and disemboweling them while praying in an effort to atone for their sins.[5] According to Lev, they used the prophet's teachings to justify these acts even though they were not found in her sacred texts.[3]

Years on from the war, a peace was brokered between the Seraphites and the WLF.[6] However, holdouts and a growing desire among elders to control certain parts of the city caused the war to break out again. They also began accepting people from the WLF who defected so long as they practiced their beliefs. Soldiers also became exempt from certain Seraphite religious followings, notably the decree that forbade them from using "old world" creations (guns and electricity) in order to make combating the WLF easier. They also at some point made bases high up in skyscrapers, building bridges between the buildings to make traveling around WLF controlled terrain easier.[3]

Lev wished to join his sister Yara in the new war but the elders arranged for him to marry another Seraphite. He refused and shaved his head, an act that was deemed blasphemous and treasonous. These incidents were rare but substantial enough that elders branded them as apostates and permitted their killings if found.[3] The event led to Lev and Yara fleeing their home. The Seraphites pursued and captured Yara, taking her for persecution before their patrol leader, Emily. However, Lev intervened with his bow and (with Abby's help) they managed to escape.[7]

By the spring in 2038, the Seraphites were once more losing the war against the WLF and suffered a large scale attack on their island. The Seraphites in the farmlands evacuated their children as best they could to their lifeboats, though many were destroyed by the WLF. Haven was set ablaze and close-quarters fighting broke out between the residents at Haven and the WLF soldiers.

Despite the surprise attack, the Seraphites' resilience proved too much for the WLF, with at least three battalions (Alpha, Bravo and Echo) all being defeated in the night's fighting, including Isaac's company. Yara remarked that the Seraphites had been expecting an attack for months, hence their ability to launch a counterattack in mere hours.[4]

The fighting ended with the Seraphites forcing what was left of the WLF's invasion force to retreat, albeit leaving much of their island and homes in ruins.[4]

Contrasting the gun-reliant WLF, the Seraphites primarily use melee weapons and silenced weapons like bows and arrows, although some can be seen using rifles, shotguns, and handguns.[5][7] Given their lack of equipment, they are more stealth-reliant than the WLF, preferring to blend in with the environment in forests and open areas.[5] As such, they currently control less of Seattle, primarily the woods and outskirts and skyscrapers where they have constructed bridges to travel across and over WLF controlled territory.[3]

As they lack suitable equipment, the Seraphites prefer to surprise enemies like the WLF in ambushes, much like the Hunters do against trespassers in Pittsburgh. To make such tactics effective, they ride horses and focus on damaging the WLF's trucks in order to prevent them escaping their attacks.[7] Furthermore, in order to prevent enemies from understanding their tactics, given most of their enemies understand English, they use whistling to coordinate their searches and communicate information.[3] Such makes it difficult for the likes of Abby and Ellie to understand them, making attacks on the pair well strategized.[5][7]

Despite their unorthodox methods, the Seraphites are losing the war against the WLF with many encounters against the group ending in the Scars' defeat. What helps little is that their fighting force is only a little over five hundred compared to how the WLF possess thousands of residents and several battalions worth of soldiers.[4] However, they still win enough skirmishes that the WLF's leader Isaac Dixon believed the Seraphites had the potential to win the war in Seattle in the long-term, especially as more WLF members by 2038 had defected to support the Seraphites or attempted to escape the city.[7]

During the island invasion in 2038, the Seraphites put up a vicious resistance. Despite countless casualties and their homes being burned, the Seraphites managed to push the WLF's attack back from their villages and centered the assault around Haven, eventually launching a counterattack that forced the WLF to retreat, leaving hundreds dead on their shore. Isaac's fears that the Seraphites could defeat them were realized, as the WLF's main fighting forces were butchered, making another invasion unfeasible.[4]

The Seraphite's religion, stemming from the prophet's teachings, is central to their society and lifestyle. The prophet is treated as a messiah, with many paintings and wooden carvings made in her image.[3] A book of her teachings functions as a religious text. Members regularly quote her teachings, sometimes as comfort during adversity. Prayer and church gatherings are compulsory within the community.[4] In line with their spiritual worldview, defectors are referred to as "apostates", and the Infected are referred to as "demons".[7]

According to Lev, the prophet's texts promoted the Seraphites living a life in line with nature and detached from the civilized world, believing mankind's advancements were responsible for their demise.[3] As such, the Seraphites live largely ascetic lifestyles: they generally travel on horseback, are largely agrarian, and consider gathering resources from the "Old World" is a taboo. Although, soldiers are exempt from this condition. Their homes are devoid of any adornments beyond religious icons, and all members wear identical attire. However, they do seem to employ at least some metalworking, as evidenced by their equipment, which includes sickles. The Seraphites also seem to shun material indulgences. The culture is strongly communal and collectivist.[4]

The Seraphites' rules and traditions are strict. Elders lead the group and assign the members their roles in the community, with some decreed as soldiers and others into pre-arranged marriages. The betrothed must receive permission from the Elders before having children. Elders also hold special privileges, including top priority in gathered food.[4] Consequences for breaking tradition are harsh and potentially punishable by death. Parents are sometimes held responsible for their children's sins, although the parent's faith is a determining factor in such punishment.[4][8]

The Seraphites are notorious for their brutality, often practicing ritualistic sacrifices on enemies. They hang their sacrifices by the neck and disembowel them, believing that they are "nested with sin". After doing so, they chant as a unit "now they are free", a prayer in an effort to atone for the murdered victim's "sins".[5] The phrase "clip their wings" also has particular significance to members of the cult, as it is used when in the presence of non-members whom they wish to harm.[7]

Conversely, Lev claims all of the prophet's teachings promoted peace and that violence was not mentioned anywhere in her scripture. Lev mentioned the ritual killings and obsessive war with the WLF came after their prophet's death, when the elders in the groups took control and began changing their beliefs.

All members of the Seraphites share certain characteristics, the most notable being their Glasgow smiles. These scars have religious significance, stated by the prophet as an acknowledgement of mankind's innate imperfection.[7]

Men and women wear identical attire: dark pants, black shoes, white undershirts and hooded leather trenchcoats. The only difference between men and women in appearance is their hairstyle: all men have shaved heads with no facial, while all women wear their hair in a braided crown style.

A close up of the female model. 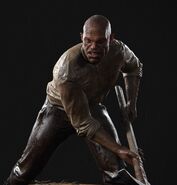 The male Seraphite brute model.
Add a photo to this gallery

Ellie uses her switchblade against a Seraphite.

Ellie about to shoot a Seraphite.
Add a photo to this gallery

A mural of the Seraphite prophet leading her people.

A mural for the Seraphite prophet.
Add a photo to this gallery

Retrieved from "https://thelastofus.fandom.com/wiki/Seraphites?oldid=105620"
Community content is available under CC-BY-SA unless otherwise noted.