Smugglers are survivors and enemies who appear in The Last of Us and American Dreams, and are mentioned in The Last of Us Part II. They take jobs involving sneaking people, supplies, and illegal contraband past military-controlled areas for payment in illegal goods such as guns, ration cards and drugs.[3] Many turn to smugglers in order to get into quarantine zones when they lack proper identification forms or paperwork.[4]

Joel and Tess are smugglers and partners in crime who live in the Boston QZ. Every month, they purchase shipments of food, ammunition, and other things from Bill, a survivor living in the town of Lincoln.[5][6] Another smuggler, Robert, is a weapons dealer who hires a group of smugglers and thugs to serve as henchmen and bodyguards when he is targeted by Joel and Tess for failing to return firearms he owed them, due to having given them to the Fireflies. Tess and Joel also had dealings with a man named Donovan, though he is never physically shown or mentioned outside of artifacts Joel has.[5]

Most of the smugglers appear to carry at least a melee weapon or a pistol, although some only use their fists. Some are also shown using gas masks in spore-filled areas.[3]

The smugglers in Boston thrived in secrecy. They dug tunnels to sneak people in, made several secret entrances and exits to their base and the city to hide from the military, and some even set up shop in the slums to trade goods such as bullets and guard dogs for ration cards on the black market. Some smugglers held boxing matches, betting their ration cards on a fighter to earn more, while others were hired to guard citizens betting their ration cards in games of poker, typically carrying a melee weapon to deter onlookers.[3] Some smugglers, like Tess, used ration cards to bribe information, surprisingly from children too. Some, like Joel, also mapped out military patrol routes, tunnels that they can access, and where their contacts lived, such as Donovan and Robert.[1]

While Ellie and Riley were being interrogated by Marlene, a group of smugglers attacked the Fireflies. Riley managed to kill one in the skirmish, hoping it would gain Marlene's trust, but such action only aggravated Marlene, who had lost several men because of the smugglers.

In Boston, a pair of smugglers were hired by Robert to assassinate Tess but failed, being killed by Tess herself. Due to the attack and not paying them their guns, Tess met up with Joel and went to a warehouse in Area five to confront Robert.[2]

When crossing through the wall to reach Robert, Tess and Joel found two smugglers underground. One was trapped and optionally mercy killed by Joel, the other being killed by runners before the pair could do anything.

They managed to get back into the city, bribing their way into the slums, where most of the average smugglers or smuggled citizens lived. As the pair entered the slums a smuggler tried to offer her a bargain but she harshly refused. They pressed on, one women claiming she "[doesn't] barter for bullets", another selling rodents as food and a third saying he had just sold all of his guards dogs so Joel should come back next week. The pair entered the market, one smuggler asserted "you touch it you buy it". Another acknowledged Tess, much to the annoyance of his girlfriend.

While crossing past a fistfight occurring at the side, a man tried to stop Joel from proceeding further. As Joel braced himself for a brawl, Tess ordered the guard (revealed to be Malick) to sit down. Upon seeing Tess, the man complied, the pair having once associated with each other. Coming towards the area of the warehouse, Tess used ration cards to bribe a smuggler standing guard to tell her where Robert was, the guard sheepishly telling her he had returned to the wharf.

When they neared the warehouse, three smugglers attempted to stop them, one threatened to bash Tess' skull in. Undeterred by the guard, Tess shot the man then covered Joel so he could take out the other two. The pair forced their way through the warehouse, learning Robert was behind on paying his smugglers as well, sparking animosity between them, and how they are forced to stay at night since Robert is extremely paranoid. They also hear two smugglers accurately predict Joel and Tess' arrival and other comment on the current condition of the zone and how they have lost contact with their trade merchants in the north and south.

Joel and Tess soon found Robert with the majority of his smugglers, watching as he retreated to his makeshift office. Tess and Joel proceeded to kill all of the guards to get to Robert.

Robert deterred them by firing at them with a pistol. Tess assured him they "just [wanted] to talk" but he crudely swore at them before fleeing. They gave chase, successfully cornering him at a locked gate. His attitude changed to a more friendly tone but Tess still detained him with a metal pipe and had Joel pin and break the man's arm. They then interrogated Robert, discovering he had sold their guns to the Fireflies. Knowing the smugglers wouldn't be strong enough to defeat the militia group, Tess shot Robert dead.[3]

When escaping Boston, Joel can find a note from a smuggler from the Quarantine Zone waiting to meet up with a survivor called Frank, who had arranged to be smuggled in to the zone. The smuggler had been given Frank's papers by his superior, likely Donovan. However, Frank never showed and the would be smuggler died waiting for him.[7]

When Joel is fighting against the Fireflies in St. Mary's Hospital, he can find a recording from Marlene, who mentions how Joel was the smuggler from Boston who was tasked with smuggling Ellie from the city to the Fireflies.[8]

While not seen in the game, the smugglers are mentioned several times. Notably, Joel's role as a smuggler is brought up by Dina, Jordan and Owen Moore and how the smuggling trade was notably distinct within Boston, suggesting smuggling activities were a unique practice to the Boston area.[9][10] Ellie also mentions them to Jesse, lying that the Fireflies killed Joel because he failed to smuggle them the supplies they wanted.[11]

Unlike other groups, the strength of a smuggling operation is based solely on their own skill, rather than the equipment they use or numbers. The difference in each smugglers competence is evident in their variety in equipment. The smugglers who fought the military wielded double barrel shotguns and rifles.[12] However, those in the slums preferred to use baseball bats, pipes and even machetes. Meanwhile, the smugglers Tess and Joel face only used 9mm pistols and 2x4s. As such, they are arguably the weakest group fought in the game. Although, it is worth noting that the player is only just learning how to play when the smugglers are encountered, indicating these smugglers are a tutorial enemy type, intent on introducing players to combat mechanics rather than challenging them.[3]

While part of the larger smuggling community, Joel and Tess are their own private team. Joel is formidable, a capable combatant and skilled with many firearms.[13] Tess is also a capable smuggler, as she managed to kill two of assassins on her own despite them surprising her. She also had contacts throughout the city, ensuring she and Joel could get anywhere so long as they had enough ration cards.[3] Her influence stretched outside Boston, as Tess arranged a successful trading scheme with Bill in Lincoln.[14] While Joel and Tess encountered Robert's larger and better-armed smuggling group, they eventually overwhelmed the group. The pair were also well known in Boston, many fearing them and some doing their best to avoid ending up on their bad side.[3]

Robert is an example of a weak smuggler, running in fear of Joel and Tess and unable to defend himself in any way, favoring persuasion and bribes to protect his life like with Tess and Joel and with some of Boston's soldiers.[3][15]

Smugglers also generally do poorly against infected. Two masked smugglers were briefly shown to encounter runners, but were quickly defeated, with one being eaten by two of them and another becoming trapped while fleeing from the third, later optionally shot by Joel. He and Tess, however, do well against the same group of infected, easily killing them in hand-to-hand combat.[3]

A group of smugglers lining up for food in the slums. 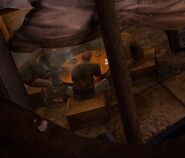 A poker game in the slums between smugglers.

A smuggler with Joel and Tess.

A fight in the slums between smugglers.

Tess using rations cards to bribe a smuggler for information.

A smuggler selling dogs for 15 ration cards each.

A smuggler drinking alcohol at his stall in the slums market.

A woman selling clothes, guarded by a smuggler.

A smuggler attacks Joel with a 2x4.

A trapped smuggler with a gas mask.