Survivors are human characters who are not infected by the Cordyceps brain infection (CBI), or simply haven't reached stage one of the infection yet. Most survivors outside of the FEDRA-controlled quarantine zones or independent settlements are hostile towards others. They are one of the main enemy types in The Last of Us, Left Behind and The Last of Us Part II, alongside the infected.

After the outbreak of the CBI and general collapse of civilized society, the United States government broke down, save for a handful of departments and the military, which initiated a state of martial law and placed all survivors in walled-off Quarantine Zones. Most of these zones have been abandoned, like Salt Lake City[2] and Hartford[3] except for a few of them across the country, like Boston.[4] Civilians and soldiers reside in Boston. The soldiers rule under martial law, and the civilians work in exchange for rations. This has led to the rise of a thriving black market in the area.[5]

The Fireflies are an organized group of survivors who rebel against the government for their perceived righteous fight for mankind.[6] Hunters are an enemy type encountered in Pittsburgh, made up of hostile survivors of the collapsed Quarantine Zone.[3] Bandits are another hostile type which appear in Jackson County, terrorizing a group of survivors at the Dam in an attempt to gain their supplies.[7] Cannibals appear in the University of Eastern Colorado[8] and Silver Lake, having been forced to resort to desperate measures to survive in the barren world.[9]

Two other relatively large groups are found in Seattle. The two groups, the religious extremists called the Seraphites (Scars) and the militia group known as the Washington Liberation Front (WLF) are currently at war with one another for control of the city.[10][11]

Another significant group is located in California, Santa Barbara, known as the Rattlers. They are a heavily armed and sadistic group of raiders who capture outsiders, known as "runaways", and force them to work for the group as slaves.[12]

Some of the various groups of survivors who are not ruled by martial law are under the command of an elected leader, like David for those living at Silver Lake[9] Isaac Dixon for those living under WLF rule in Seattle,[10] and Maria for those in Jackson,[7] while others are independent individuals just trying to survive, like Bill[1], Henry and Sam.[3]

Bill and Frank formed a partnership in their home town of Lincoln, Massachusetts. Even though the place was heavily fortified with multiple traps and safehouses, only Bill and Frank lived there. However, Frank was later bitten by an infected and committed suicide in order to avoid becoming a runner.[13]

It is well protected, fortified by large barricades on the main roads and customized nail bombs around alternative routes like alleyways.[1] It is also made hard for infected to get through as, even if they go through the alleyways, they will be unable to climb the high buildings. Bill also possessed an armory which contained shotguns, nail bombs, and a workbench to craft and improve weapons.[14] He also had a fairly large amount of ammunition; some of this was stolen by Frank when he made his attempt to escape,[13] but was later recovered and used by Joel.[1]

At some point after the outbreak, a man named Ish decided to return to the mainland from his fishing boat to see what was left of the world.[15] He decided to live in the abandoned sewer tunnels under Pittsburgh.[16] Eventually, he invited Susan, Kyle, and their children to come live with him,[17] which they did.[18]

Another man named Danny arrived and guarded the settlement from infected and raiders with Ish. It soon grew to about 50 residents. They were very organized, having a code of conduct, rain catchers, shower stalls, and a school. They kept animals, as evidenced by several small cages found throughout the settlement.[19]

They were very strong, shown in a drawing that they had access to body armor and assault rifles and "shorty" shotguns. They even had effective melee weapons such as pipes and machetes.[20]

All this came to an end, however, when someone left a door open, letting the infected flood in. Kyle and some of the children were trapped in a classroom, and opted to commit suicide.[21] Ish, Susan, and a few of the children escaped into the Suburbs,[22] but it is unknown what happened to them after that.

Captain Regan Francis and her squad were members of the 4th Infantry Division stationed at the Denver QZ. While on a rescue mission, their helicopter crash-landed in the Colorado Mountain Plaza.[23]

While there, their patient turned into a runner and killed the pilot, Sean Brendon. While Chief Warrant Officer Larry Caulfield managed to kill the infected, he was bitten, forcing Regan to enact the military protocol of killing all who become infected, having Private Eugene Ellis restrain Larry, whom she executed despite his pleas.[24] Regan later regretted her decision, writing that she "shot him like a dog" while he begged and tried to tell her that he still had time left.[25]

As such, when Private Ellis was bitten, Regan immediately amputated his right arm, thinking it would prevent the fungus from infecting him. With no recorded precedent of a human ever surviving a bite via amputation, the two wondered whether Regan's actions were right or not. Regan initially thought of abandoning Ellis after he attacked her due to running out of food, but later decided to stay with him.[26] Ellis eventually killed her out of fear that he would be killed when she reached for her gun, only to flee from infected, his wound reopening in the process. He died of his injuries in an air duct while lamenting over Regan's actions.[27]

After Tommy Miller left the Fireflies, he eventually settled down in Jackson, Wyoming. There, he found a group of survivors that were working to restore an old hydroelectric dam to working order. The group was led by Maria. Tommy claims that they are 20 families strong.[7] Joel Miller and Ellie eventually joined the group in 2034. Other notable members include: dog Buckley, Cat, Dina, Earl, Esther, Eugene, Houser, Jesse and Seth.[28]

They are quite formidable, possessing a considerable amount of hunting rifles which are seen used by their dam workers and guards on the walls. They are skillful users of these weapons, shown by how they effectively stand up to any attackers.[7] Some could even ride and train horses, and others were skilled in construction and engineering. They also have people on watch, making it very difficult to enter unnoticed.[28]

By 2038, the community had grown to even greater strength. The members used horses to regularly patrol the surrounding area for infected and bandits. However, their numbers were still small enough that most patrols were no larger than two of three people. They also trained new patrols up, typically young adults.[29] Their community was also well barricaded with high walls surrounding their town. Tommy also implied that there were enough supplies and trained patrol men in Jackson that they could feasibly launch an effective attack on the Washington Liberation Front in Seattle, albeit leaving the community vulnerable to hunters and bandit attacks while gone.[28] 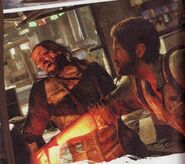 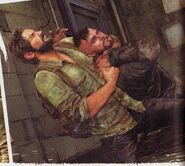