View source
watch 02:52
Roblox: DeepWoken - The Loop
Do you like this video?
Play Sound
This article is about the signature weapon used by Ellie. For the collectible artifact of the same name, see Switchblade (artifact).

Infinite (does not break)

The switchblade is a small folding pocket knife similar in size and appearance to an Italian Stiletto Switchblade. In The Last of Us, Ellie carries a switchblade with her. It is also her signature weapon, having used it in tight situations like stabbing the military soldier's knee that was scanning her for CBI when captured with Joel and Tess, giving them time to kill the two soldiers.

It takes about one and a half times longer for Ellie to stealth kill an enemy compared to Joel, but the switchblade can be used to kill from the front as well as having unlimited uses.

Without the blade, Ellie is unable to perform melee moves because of her small size and age.

The switchblade acts like a hybrid of a shiv and a blunt weapon, as it does not degrade but takes many attacks to kill an enemy, yet can be used for finishing and assassination moves. Ellie cannot craft or use melee weapons, except the switchblade. It takes around four hits, like a blunt weapon, to parry an enemy, before performing a finishing move like thrusting the blade through the enemy's abdomen and instantly killing them. The finishing move can also have Ellie jumping up and grabbing the enemy's skull and stabbing it.

The switchblade takes the place of both the Shiv and the regular choking stealth kill, upon which Ellie will jump on an enemy's back and stab him numerous times. Despite making a lot of noise, killing an enemy in this way is no more likely to attract attention than Joel's stealth kills. Clickers can be killed from the front if they are unaware of Ellie's presence. However, unlike Joel's strangle and shiv kills, Ellie's victim will move forward a lot, and it is possible for one to be carried into the enemy's sight. When stabbing non-lethally, Ellie's cuts won't make enemies stagger while being hit, making a raw hand-to-hand fight against enemies hazardous for Ellie's health.

A good strategy for making Ellie's melee encounters easy would be to toss a Brick or Bottle at the enemy, then use Melee since she will automatically deliver a execution while the enemy is stunned by the item. Infected staggered by David's punches in "The Hunt" are also vulnerable to a finishing switchblade stab.

Ellie stabbing an infected with the switchblade.

Ellie pointing with her switchblade at a dead survivor. 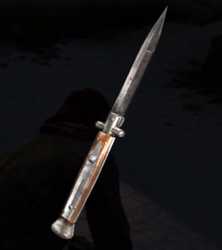 Ellie's switchblade in the Artifacts section.

Ellie stealth killing a cannibal with her switchblade. 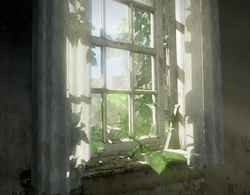 The switchblade that appears on the window in the menu after completing the game. 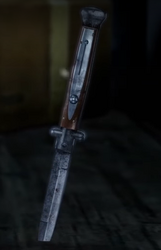