The Last of Us Wiki
Register
Don't have an account?
Sign In
Advertisement
in: American Dreams
English

The Last of Us: American Dreams

The Last of Us: American Dreams

During the production of The Last of Us, Dark Horse comics approached Neil Druckmann with the idea of producing a tie-in comic book for the game. Initially wary of the prospect, Druckmann said Dark Horse “lured him into it because "they didn't want to do something tangential” with the opportunity of expanding their characters and universe beyond the game.[3] On the subject of whom he wanted to work on the project, Druckmann took Dark Horse up on webcomic artist Faith Erin Hicks (Demonology 101). Already aware of the game, Hicks was later signed to the title by Dark Horse as co-writer and artist.[3]

On the matter of the comic’s content, Druckmann and Hicks stated that the American Dreams would focus primarily on Ellie’s “day-to-day life” inside the quarantine zone that goes unexplored in the game. On the cusp of her thirteenth birthday, Ellie is faced with the choice of joining the military or suffer ex-communication and survive on her own. Hicks cites that American Dreams is similar to her own works detailing the life of “teenage girls and zombies” and the chance to combine the two elements provided a challenge on the perspective of surviving in an environment like Ellie’s.[3]

On the subject of Riley, Hicks, and Druckmann describe her as a “tough” and “cool older girl” in the story.[3] She forms a relationship with Ellie on the eve of her own choice to joining the military and will affect the events that led up to the game.[5][6][7]

On June 9, 2022, it was announced that all four issues would be included in the Firefly Edition of The Last of Us Part I. Each issue will feature new cover art by David Kopfstoff.[8][9] 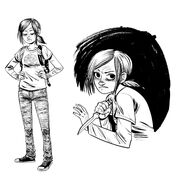 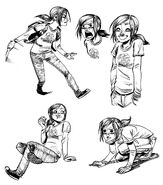 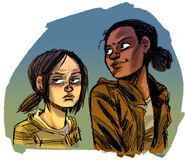 Issue #1 variant cover released exclusively in the Survival and Post-Pandemic Editions of The Last of Us (no text).

New covers included with the Firefly Edition of The Last of Us Part I.