The Last of Us: Left Behind

View source
watch 02:56
Raise a Floppa - The Loop
Do you like this video?
Play Sound
This article is about the DLC expansion for The Last of Us. For other pages that may have a similar name, see The Last of Us (disambiguation).

The Last of Us: Left Behind

The story of Left Behind follows a non-linear timeline of both Ellie's time with Riley before meeting Joel, and the aftermath of the fight with David's group at the University of Eastern Colorado. During the main events of The Last of Us, the scene begins with Ellie hiding Joel in an abandoned Colorado Mountain Plaza, using her summer shirt and some binding to stem the bleeding from Joel's impalement while she explores the mall for medical supplies. She first comes across Weston's Pharmacy, which has already been picked clean of all medical supplies. However, she spots a downed military helicopter.[3] Avoiding the infected she makes her way to the helicopter, learning the fate of its survivors along the way and finally finding a medical kit.[4]

Set three weeks before the The Last of Us takes place, Riley surprises Ellie at the boarding school. Revealing that she became a Firefly during her absence, Riley takes Ellie to the abandoned shopping mall she brought her to when they first met. The two girls played around, involving masks, brick throwing and a carousel.[5] However, Ellie keeps asking why Riley brought her here. Riley evades the question until reluctantly revealing that the Fireflies assigned her to another group in a different city, and she wanted to see Ellie one last time despite Marlene forbidding her to do so. To cheer themselves up, the girls had a water gun fight and danced to some music. Ellie pleaded with Riley not to go despite having earlier encouraged her to. Riley drops her pendant in response and Ellie kisses her. Riley starts to say something about how Marlene won't approve, but she is interrupted by runners that were attracted by the music.[6]

Shifting back to the Colorado Mountain Plaza, Ellie attempts to make her way back to Joel with the medical kit. However, she is impeded by both the infected as well as survivors from David's group. Knowing her weakness in hand-to-hand combat against both enemy groups, Ellie uses her ingenuity to start a fight between the cannibals and the infected, only eliminating or avoiding the remnants afterwards. Ellie soon reaches the area where she hid Joel but had to defeat the cannibals attempting to break the lock open. Seemingly safe, she also tries to get inside until a wave of reinforcements interrupts her. In a last stand, Ellie kills the cannibals one by one, with some unwitting help from the infected attracted by the sounds of the fight. Once finally safe Ellie gets back to Joel and treats his open wound.[7]

Back in the past Ellie and Riley desperately attempt to escape from the runners in the mall. Fighting them off along the way and making several detours, the girls finally come to the scaffolding to escape. However, Ellie fell off the scaffolding and back into the mall. The girls helped each other fight off the runners until they were finally safe. Though the runners were successful in biting the two girls. As Ellie lashes out over being infected, Riley comforts her somewhat, and tells her last words before the two leave the mall. Her words were also deep in Ellie's mind as she prepares to leave the plaza and take Joel to another hiding spot for the coming winter, eventually leading up to the events of the Lakeside Resort chapter.[8]

Left Behind features less combat than that of the main game, with the DLC focusing more on exploration and the narrative. It does, however, have a new combat feature where the player can trigger a fight between the infected and human enemies, allowing the player to sneak through the distraction or eliminating the remaining enemies. Naughty Dog had stated that this was a feature they wanted to incorporate in the main game, particularly in the Pittsburgh chapter, but would have taken up too much time to code in.

The DLC received very positive reviews from critics. The DLC holds a 89.84% on GameRankings, and a score of 88/100 on Metacritics. 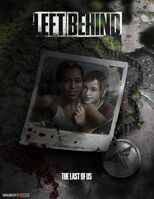 Riley and Ellie featured on the Left Behind poster.

Riley returns to the school

Riley with her gun and Ellie with her switchblade.

Riley and Ellie enter the arcade